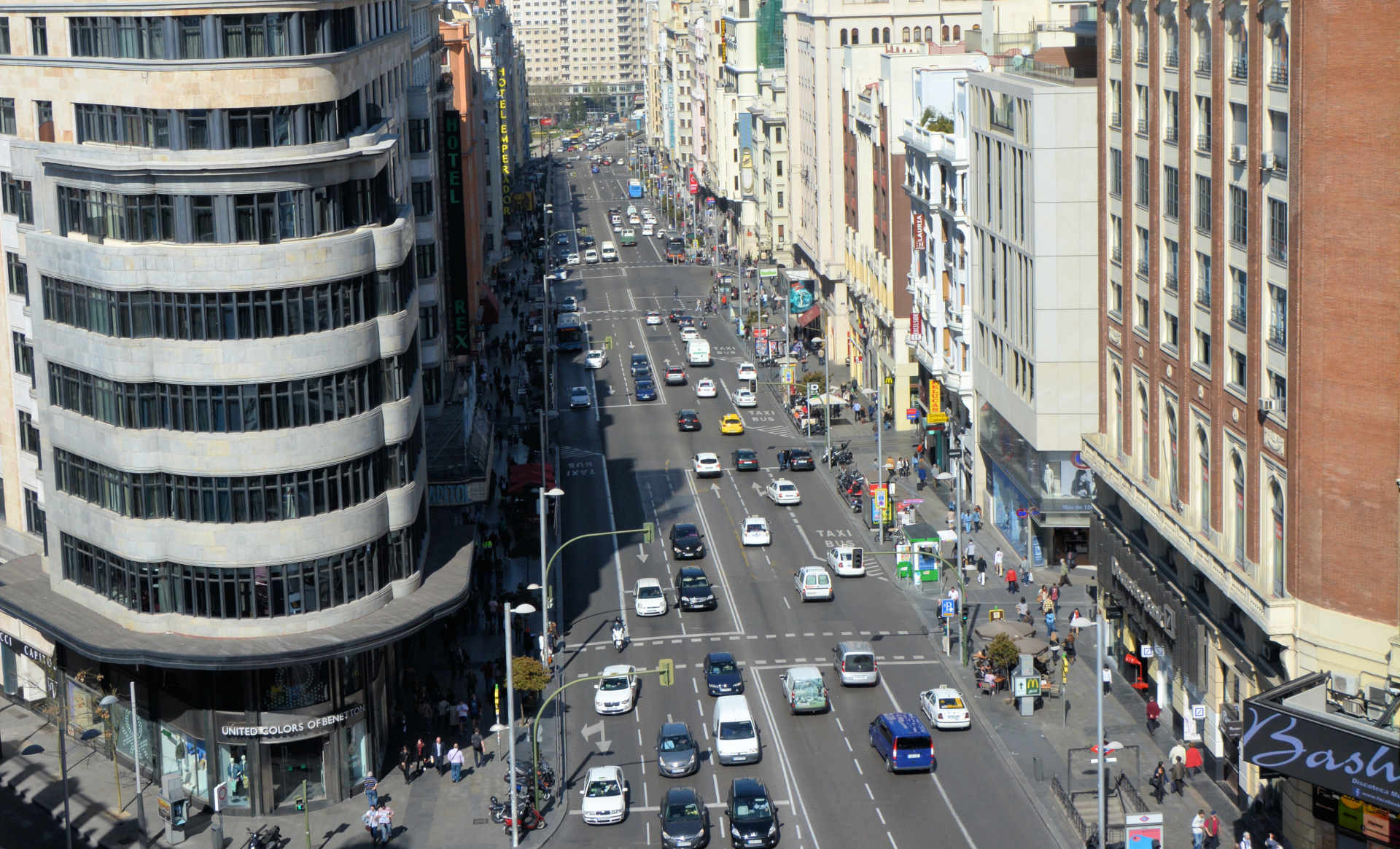 Informative and inspiring for my students

''Every year I bring a group of American students to Madrid to study many subjects, one of which is the Spanish Civil War. This is a subject American students know very little about despite its importance in shaping modern Spain and Europe in the 20th century.

Although I know Madrid well and have a good knowledge of the Spanish Civil War history, I want my students to learn from someone who has a deeper connection to the war than I have and who knows Madrid like the back of her hand. Before I even met her, I knew through our e-mail correspondence that I had found that person in Almudena Cros. After arranging everything via e-mail, we met for the first time (promptly and exactly as planned) in the Puerta del Sol.

"The  itinerary designed by Almudena has the virtue of combining her knowledge as a doctor in History of Art and her role as President of the Association of Friends of the international Brigades (Asociación de Amigos de las Brigadas Internacionales), which make it possible to observe places such as the Puerta del Sol, Plaza Mayor or the Telefónica building from a historical and aesthetic point of view.  But perhaps what makes this walking tour so precious is the way in which this knowledge develops into a tactile, emotional, and ultimately experiential value.

As soon as we start the itinerary, Almudena opens a folder from which she pulls, as we stroll, large-scale reproductions of photographs from the period or newspaper covers that show the very places we are looking at thorugh the city centre, taking us back to those years when these images were captured.  It is a way of reclaiming the recent memory of this city in a visual way, through a kind of photographic archaeology: we revisit the sites where bombs hit right in the heart of the city, the now disappeared Hotel Florida, or the profusion of banners encouraging the madrileños to resist the fascist attack.

Has encyclopaedic knowledge and leads her tours with passion and conviction

"I want to add my endorsement of Almudena Cros and of her “Across Madrid” company and its Spanish Civil War tours. As others write, Almudena has encyclopaedic knowledge of Spain’s Second Republic and its heroic resistance to fascist treachery, as she leads her tours with passion and conviction.

Friends and Family of the Abraham Lincoln Brigade (FFALB in the United States) have organized or inspired journeys that follow the paths of our elders in the Spanish Civil War to battlefields, to field hospitals, R&R villages and training grounds.

Almu was my guide in one such trip to a small village in the region of Madrid  in 2011. Our hope was to meet “Maria,” who as a small child, the story was told, had strong memories of being lifted to his shoulder by one of the most prominent American Brigaders during the defense of Madrid.  When Almu located her house in the village, Maria and her husband were reluctant to open their doors to strangers. Perhaps they did not wish to revisit the heartbreak of the civil war. But Almu was so gentle, sensitive and compassionate that she managed to convey to this couple the emotional importance that this trip held for us, relatives of brigaders.  We were accepted and welcomed as guests, and sent off with tears of gratitude.

"I am Dr. V. George Venturini of 20 Patons Road, Hazelwood North 3840, Australia.  I was an avvocato at the Court of Appeal in Bologna, Italy and an assistant professor at the University of Ferrara, Italy until 1958. On that year I was accepted for graduated studies at Northwestern University in Chicago (1958-1962). Susequently I taught at the Osgoode Hall Law School of York University, Toronto. I then moved to the universities of Singapore, Queensland, Valparaiso, Chicago and returned to Australia in 1975 to serve the Whitlam Government as Trade Practices Commissioner.

I have taught, administered, and advised on, law in four continents, ‘retiring’ in 1993 from Monash University, Melbourne.

My latest book is titled The Last Great Cause - Volunteers from Australia and Emilia-Romagna in defence of the Spanish Republic, 1936-1939 (Sydney 2010).  It took me several years to complete the work.

Adviser for my book on the Spanish Civil War, and the best guide I have ever employed

"I’m a professional writer, the author of 25 books and several hundred magazine articles, the recipient of a Pulitzer Prize in Nonfiction. I recently published a history of the 1936-1939 Spanish Civil War.

To research my book, Hell and Good Company, my wife and I traveled to Spain for two weeks to walk the ground. In and around Madrid, the historian Almudena Cros served as my adviser and guide.

Essential to the progress of my documentary on The Spanish Earth

"I have had the pleasure of acquaintance with Almudena Cros for about two years. In that time, we have established a close working relationship and friendship.

It is no exaggeration to say that Almudena's co-operation has been essential to the progress of my documentary about the making of the Spanish Civil War classic film The Spanish Earth, by filmmaker Joris Ivens and Ernest Hemingway. Her assistance in research, translation, and interviewing has been invaluable.

Under Almudena's guidance, Hemingway biographer Alex Vernon and myself have tracked down Civil War sites in Madrid, and tramped some of the battlefields.   She has readily offered her close knowledge of the nuances of the Spanish Civil War, and her perfect knowledge of English has made everything accessible to someone like myself whose Spanish is less than perfect.

It is a pleasure to watch Almudena reacting with people in the process of interviewing for my film; she has the rare ability to charm our people into responding with absolute candour to her questions. She brings an enthusiasm to everything she does that is infectious. As well as translator, researcher, interviewer, she has readily earned the title of associate producer. I look forward to profiting from her knowledge and skills well into the future. And to the sheer pleasure of her company."

A true educator, uncovering and preserving her country's history

''We are the Friends and Family of the Abraham Lincoln Brigade, the Americans who saw the dangers of Fascism and went to Spain to defend the legally elected democratic government of Spain from Franco's fascist rebellion, which was backed by Hitler and Mussolini's forces and armaments.

It is a pleasure to be able to recommend Almudena Cros' tours to those coming over to Spain to seek a better understanding of the Spanish Civil War.  Almudena combines outstanding scholarship and an engaging, easy to understand delivery with a passionate commitment to the anti-fascist values we uphold.  Whether you are learning about the Spanish Civil War for the first time or honoring a friend or family member's connection to Spain, her tours will enhance your travel experience.

Dr. Cros is a true educator, uncovering and preserving her country's history, and that of the International Brigades.  Touring with Almudena will also help you to understand the current issues in Spain such as the movement for the reclamation of historical memory.  She is literally, and figuratively, tireless in her efforts to provide a tour which will inspire and enlighten!''

Nancy Wallach, on behalf of the Friends and Family of the Abraham Lincoln Brigade.

Invaluable to me in my research on Ernest Hemingway

''I cannot imagine a better tour than the one Dr. Almudena Cros provides. She has been invaluable to me in my research on Ernest Hemingway's participation in the Spanish Civil War, and we are currently collaborating on a documentary with Villon Films. She knows the war, she knows Madrid, she knows art history, and she is passionate about all three. She is a born teacher, full of enthusiasm for sharing what she has learned while continuing to learn, qualities that make her a perfect guide to Madrid, Jarama, Brihuega, or wherever else in Spain you might want to explore. Across Madrid is not just a job or career for Almudena; it's her calling.''

Dr. Alex Vernon, Professor of English at Hendrix College, Gulf War veteran, Member of the Board of Trustees of the Ernest Hemingway Foundation and Society and author of Hemingway's Second War