A long, long week has gone by since the despicable terrorist attack on Paris took place last Friday 13 November.  A truly wonderful, generous, welcoming, lively European capital was ripped to pieces that night, and the rest of the world woke up to the terrible news a few hours later.  The sudden loss of human life, the physical and psychological trauma endured by the victims and their loved ones was overwhelmingly painful for all involved and for anybody who has a heart and the ability to empathise.  At some point, the news coverage and the images of a city- a whole country, really- in mourning were too much to bear, and I refused to read anymore.


Like anybody who has ever visited Paris, I fell in love with it at first sight.  My first trip to Paris was in 1995, a study trip during my undergraduate degree at Warwick University, led by our beloved architecture professor, the late Richard Morris. As he enthusiastically took us to Notre-Dame, Sainte-Chapelle, Chartres and various other medieval buildings, we felt so privilleged to be there and to be shown the city by such a wonderful teacher.  I promised myself I would go back there and, sure enough, I returned a couple of years later to do research for my BA dissertation on a medieval sepulchre.  Richard Morris had taught me that endurance was an intrinsic part of any art history field trip, and I certainly endured the freezing cold of Paris that February as I tried to take photographs of certain architectural details in Notre-Dame.  But I was blissfully happy to be back in the cradle of Gothic art.

For years, I kept returning to Paris as a baby-sitter, which gave me a true insight into the life that Parisians led. I  had the opportunity to go to the movies and to enjoy the local parks and museums with the child I was looking after whilst I was conducting academic research at the BNF and the National Archives.  Those were truly magic times, and I always felt welcome by the Parisians.  I never once experienced anything other than a helpful attitude towards me, and everybody always made their best to understand my broken French.

It was in Paris that I turned 40 years old and celebrated this landmark birthday with a visit to Notre-Dame.  It was a magnificent place to start a new decade, and I felt so fortunate to be there.

I returned to Paris in 2012 to attend the commemoration of the Liberation of Paris. I had been invited to this event in the Marie de Paris because, for the first time, the Spanish Republican flag was to be saluted by the French President. It was a historic moment for all supporters of the Spanish Republic and we were elated.

I last visited Paris last September with my husband and baby to speak at a Republican event at the Fête de l'Humanité. The only difficulty we met was with the metro system and its lack of accessibility for strollers.  The rest was, as usual, a wonderful sequence of great food, amazing culture, and meeting and making friends with the Parisians, who cooed over our baby wherever we went and were very kind and helpful when it came to the not-so-friendly metro transportation.

Paris has always felt my temporary home whenever I have stayed there.  I can honestly say that I have only encountered genuinely polite and incredibly cultured people there.  Like the rest of the world, I was shocked to the core when the news started coming in about the horrendous carnage in our beloved Paris.  After checking in with my friends there- they were all fine-, I felt so powerless. There was nothing I could do to help. This sinking feeling of sadness makes one feel so useless and limited.  This was exactly the same I had experienced when I was in New York during 9/11: anxiety, sorrow, frustration, anger... I know what is like to be in a city that has been wounded.  You try to overcome the shock and the grief to get on with your life, but there is this sombre feeling everywhere you go, and you can breathe the trauma all around you.  I remember the floral tributes, the photographs of the victims in Union Square, the strangers I hugged along the streets in Manhattan because everybody was constantly on the verge of tears. I was overwhelmed by grief and I wanted to help out even though there was not a lot to be done for the victims.  But I also remember I was not frightened.  I witnessed the generosity of the newyorkers towards each other, the exemplarily calm behaviour of people being evacuated that day -and the following days from a series of public places due to a string of false bomb alarms-, and the defiant look on their faces despite their shock and sadness.  I saw the best in people during those days.  There are no words to define the spirit of community that one could breathe in the immediate aftermath of the terrorist attacks.  I was given shelter by a stranger who became, of course, a good friend.

I returned to New York a year later, and revisited those new friends.  New York was still healing from the terrible wound inflicted on 9/11.  But New York needed to stand up and be seen as strong.  That is exactly what Madrid did in 2004 after the terrorist attacks in the suburban railway system.  That is exactly what Paris is doing.  Parisians are undergoing the same terrible, difficult process of coming to terms with the ugly fact that some people dislike western lifestyle and culture to the point of executing innocent civilians indiscriminately.  Apparently in the name of a religion, and daring to quote G-d  as they savagely kill people.  In any event.. Paris will rise up to the challenge and Paris, crucially, needs us.  Right now, Paris badly needs to see visitors in its streets, filling its cafes and restaurants, perusing the works of art contained in its wonderful museums and galleries, and taking photographs of the Eiffel Tower.

Demonstrations of solidarity with the French people have taken place throughout the world. Floral tributes and written messages have been left on the gates of the French Embassy in Madrid, rendering homage to the victims and sending a strong message of fraternity to our neighbouring country.

A brilliant design left at the French Embassy in Madrid embodies the sentiment of empathy with Paris.  The logo of the city of Madrid, the bear and tree, was altered so that the bear stands in front of the Eiffel Tower instead.  Very simple and poignant: 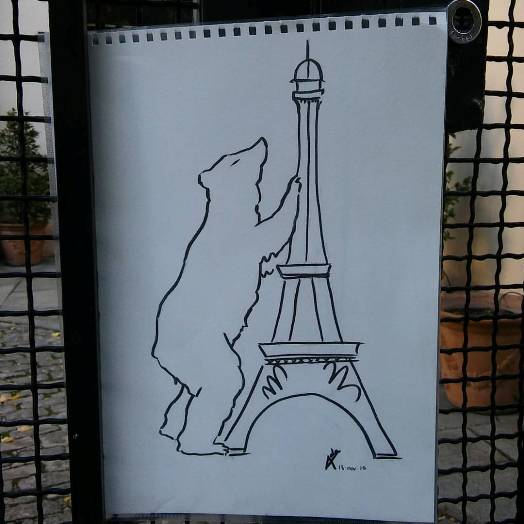 We love Paris.  We love the French people and we admire and respect the way they uphold the Republican values of of Liberté, Égalité and Fraternité.  In 1936, thousands of French volunteers joined the International Brigades and crossed the Pyrenees to join our fight against Fascism during the Spanish Civil War.  One of the messages left outside the French Embassy in Madrid bore the antifascist motto, No Pasaran, which was used during the war: 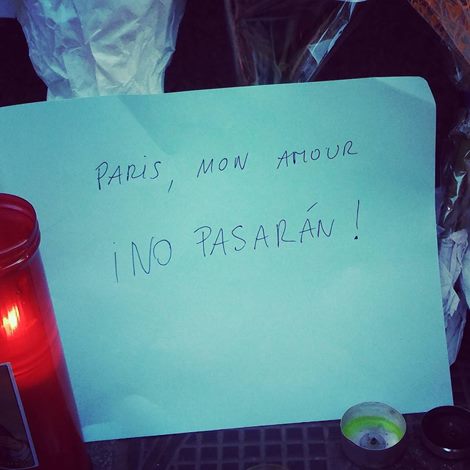 Return to Paris. Do not allow terrorism to damage any further the economy of this unique city.  Paris needs you.  Not only to sustain their tourism industry.  It is crucial to show our support to the residents of Paris, and it is very important for them to see visitors pouring into their museums and restaurants and any other entertainment and cultural venues.  It will help them regain a sense of normality and will send a firm message of defiance to those who threaten the spirit of the Republique.  This is the best tribute we can pay to Paris.  I, for one, will certainly return as soon as possible.  Terrorists will not win, and they shall not pass!

© Almudena Cros, November 2015. Please note that this article may be quoted in editorial contexts only, with source and author.