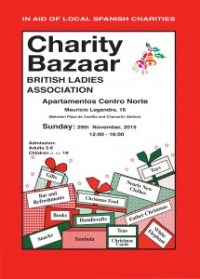 On Sunday 29th November, the British Ladies Association will be holding their Charity Bazaar in Madrid.

This is a  great opportunity to find something different for your holiday      shopping!

Let´s look at the history of this great Association in the article written by our  guest contributor Christopher Miller:

Akin to most charitable organizations, The British Ladies Association startedon a modest scale.  When the Second World War broke out in 1939 Lady Paterson - the then British Ambassador´s  Wife - incepted The Ambassadress´ Knitting Party. Groups of British Ladies teamed up to knit comforts for the troops, namely the Army, the Navy and the Marines under the Patronage of Lady Maud Hoare, later to become Viscontess Templewood.

The brilliant idea caught on and soon there were around thirty branches as more enthusiastic English ladies across the Spanish peninsula joined forces to pitch in at the knitting sessions.

When the war came to an end, the money was allotted to the British Benevolent Fund.

Until the 1970s the Bazaars were held in Gran Via (then known as Avenida de José Antonio), right in the centre of Madrid.  Later on the venue shifted to The British Institute at Almagro 5 and eventually to The British Council School in General Martínez Campos 31. In 1982 The British Ladies upgraded to the posh Castellana Hotel, located on the Avenida de la Castellana. The eagerly-awaited Bazaar is currently held at Apartamentos Centro Norte, beside the bustling Chamartin railroad station.  In recent years the annual Bazaar has been drawing huge crowds, and has become a must, not only for the British expat community but also for other foreign nationals and the locals, too.  This holiday market raises funds for Spanish charities, and it is a great opportunity to meet people, sample some festive specialties and purchase something different at the same time as helping others.

The British Ladies  Association has been going from strength to strength and, as stated on their website, they hold a variety of events, activities and gatherings.  They also have a year-round charity shop. Check their website for details regarding dates and location.

Other nationals have followed suit and now multifarious bazaars have become commonplace all over the capital and throughout Spain, but this one is really a must! 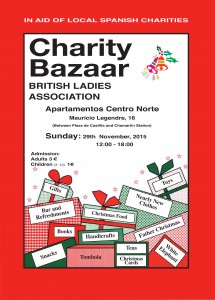 PS. I would like to thank Mr. Dabid Butler for generously donating his time, energy and effort and delving into the annals to help my research for this article.

© Christopher Miller, November 2015. Please note that this article may be quoted in editorial contexts only, with source and author.