Priscilla, Queen of the stage in Madrid

PRISCILLA TAKES MADRID BY STORM FOR THE SECOND TIME AROUND

What is the buzz about that bus?

Priscilla, the Queen of the Desert laden with glitz and glamour, has taken Madrid by storm for the second time around. Kudos to Som Produce who have given credence to the fact that this multi cast show can still draw huge crowds.

It may be a simple tale at the outset of odd individuals whose only prized possession is a tour bus christened Priscilla. However, the story gains momentum as the other characters join in and the hilarious situations keep the audience laughing in stitches.

They drive past remote hamlets and run into a large variety of characters – friendly aborigines who welcome them with open arms whilst others are hostile especially in Cobber Pedy. They have to muster up courage to defend themselves physically when one of them is attacked and their bus is vandalized. 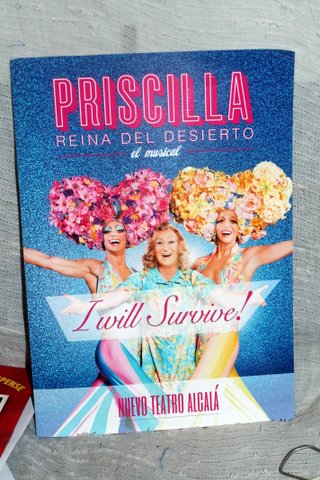 The trio soon learn that it is no joy ride when the bus breaks down. However, they are bent on continuing their journey managing to mend the rundown bus in a short period of time with the help of Bob, a middle-aged mechanic. Priscilla is ready to hit the road again – sparkling and energetic with a fresh coat of lavender paint plus a new passenger, gregarious Bob, aboard.

After an arduous journey they hit Alicia Springs. Tick discloses that the owner of the casino is none other than Marion – his wife. Splitting up has been out of the question. The other accept Tick for what he is and soon they are chatting and laughing like old chums.

At their destination they meet Benjamin, Tick's eight year old son. Tick is ill at ease to reveal his real identity to his only sibling but then is astounded to learn that his son already perceives the truth about his dad.

After the four week stint comes to an end Tick leaves with Benjamin and the others. Bernadette and Bob remain behind as the latter has found a job at the hotel.

The 1994 Australian road musical movie was the brain child of Stephen Elliot who had successfully directed Frauds – a black comedy starring pop star Phil Collins in 1993. Little did he know that Priscilla would put Australian cinema on the map bringing the LGBT community into the mainstream after winning the Oscar for the Best Costume Design at the 67th Academy Awards Ceremony. In time the flick would become a cult classic in Australia and in many countries abroad. .

The role of Bernadette, the main character, was offered to. John Cleese and Tony Curtis (the latter fared well as a drag in Billy Wilder s 1969 comedy Some Like It Hot) .They were either tied up or just turned down the offer.

Elliot finally settled for English actor Terence Stamp who had bagged an Oscar for the best supporting actor in Billy Bud, a seafaring drama based on Herman Melville´s novel directed by Peter Ustinov in 1962. It came as a surprise, though as Stamp was a bit skeptical about accepting the cross dressing role at first.

Hugo Weaving (The Hobbit, Lord of The Rings) landed the part of Tick after Rupert Everett and Jason Donovan declined the offer.

At the suggestion of Terence Stamp Bill Hunter, Australian stage, film and T. V, actor was hired to play Bob. Hunter, a recipient of the coveted Centenary Medal, accepted the offer without even reading the script.

Location shooting began in earnest at the Outback town of Broken Hill in New South Wales. Then the cast and crew moved to Mario´s Palace, a modest hotel. Eventually other major scenes were filmed at All Nations hall.  However, they had to rough it out at the shabby mining town at Cobber Pedy. Nevertheless, the shooting came to a sudden halt at Ayer's Rock (Uluru) - a sacred mount to the Aborigines, Finally they had to settle for King´s Canyon.  It sure must have been a real challenge at the Outback with the main actors struggling with the stiletto heels instead of making the scene in the regular sneakers. After all, some movies break new ground creating a novelty.

Funding the film proved to be a quite a task at the beginning even at the Cannes Film Festival. Eventually, the Australian Film Industry financed the film at a low budget of 2.7 million Australian dollars. Nevertheless, the movie soon became a box office hit all around the globe in a very short period of time.  The soundtrack of the film contributed greatly to its success. The story line and songs such as Mama Mia, I Will Survive, I've Never Been To Me, Don't Leave Me This Way and Finally left audiences craving for more.

In 2000 the controversial movie was revived at the closing ceremony of The Olympic Games in Sydney when a gigantic tricycle akin to a gigantic floral shoe led a 1980 Ford Denning striking resemblances to the bus right into the arena. It was replete with drag queens attired in silver hot pants and stiletto shoes.

There was an enormous cult following after a colorful drag queen homage to the movies was held in the stylish Fire Island Pines in New York.

Priscilla on the stage

Stephan Elliot teamed up with Alan Scott to co-produce Priscilla based on their own book. In 2006 the musical opened at The Lyric Theater Star City Casino in Sydney. The play eventually moved to Melbourne and New Zealand. Priscilla reached London´s West End in 2009 co-produced by Sir Andrew Lloyd Webber (Jesus Christ Superstar, Evita, Cats, and The Phantom of the Opera).

The Daily Telegraph called it 'the spectacular in every sense - insanity, euphoric and savagely contagious' and The Sunday Times hailed it as 'The Best Musical ever since Mama Mia'.

The show was staged in Toronto and the Broadway production co-produced by Grammy winning Award and Stage –winning actress and singer Bette Meddler proved to be a runaway success. A tour of other cities in the U.S. followed suit.

The New York Post acclaimed Priscilla as The Queen of Broadway.

The fervor caught on and far flung cities such as Seoul, the Philippines joined in the act to showcase case Priscilla winning many accolades into the bargain.

In 2012 Priscilla hit the Brazilian shores with The Brazilian Anthem Dancing Days being beautifully rendered in the finale with the first Brazilian musical performance with songs entirely in English.

Priscilla was successfully performed in swinging cities such as Stockholm – home to Volvo and Abba. Crowds flocked to see Priscilla in Athens in spite of the crisis. So it is not surprising that Madrid, the capital of musicals, would be happy to welcome Priscilla.  This was obvious when Priscilla opened at the newly refurbished Teatro Alcalá (seating capacity 1240 where musicals in the calibre of Grease, The Sound of Music and Chicago have had successful runs) in the swanky Salamanca district. A gigantic stiletto shoe caught the public unawares at the imposing entrance to the theatre. 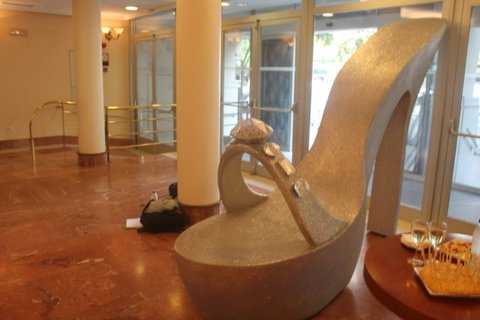 The Madrid version is a colossal vehicle with 40 actors, 500 costumes, 200 wigs and a 10-metre bus oozing charm for millions of theater goers!!

Spain is witnessing the bubbling talent injected into every role, starting with Mariano Peña, the veteran actor who is familiar to millions of TV viewers in the longest running comedy AIDA. Mariano has practically played every type of role to date in such popular series as Hospital Central, Periodistas and the swashbuckling adventurer seeking fame fortune and love in Aguila Roja.

Mariano was flabbergasted akin to Terence Stamp at the outset when he became a high stepping lady stepping into the main role and thought he was going to 'put his foot into it'.
'When I was offered the role', he reminisced lately, 'I thought to myself what a drag it was all going to be.' But he pulls it off wonderfully!!

What makes Jaime Zatarain (Tick) really tick? His track record and talent wins instant sympathy from the public as Tick who ultimately has to accept his son. The AMDA (New York) trained actor has tackled important roles in off Broadway productions such as Paint Your Wagon and The Man From La Mancha at Ithaca in New York.

Having earned a degree at The University of Valladolid and from El Dramático (ESAD from Galicia) and other diplomas Christian Escudero appeared in movies such as Sin Embargo Te Quiero and in series like Libro de Familia. On the boards he successfully performed in Romeo and Juliet and was an outstanding actor in The Sound of Music. 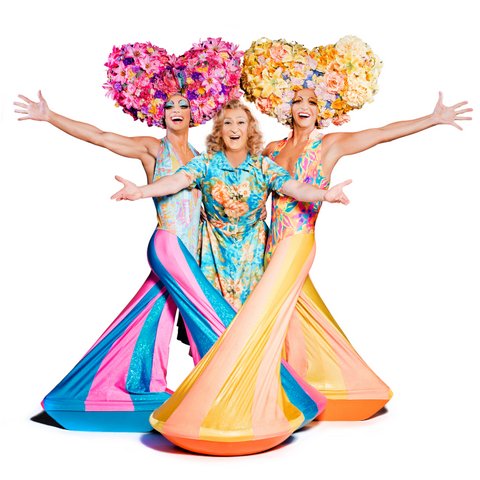 Versatile actor David Muro (Bob) was stage-bound from an early age giving stunning performances in such unforgettable roles as in El Hombre de La Mancha, The Beauty and The Beast, The Phantom of the Opera besides anchoring programs. He has also has had vital roles in Escenas de un Matrimonio. Right now he is happy playing Bob to perfection.

Two thumbs up to the three divas with their electrifying performances. The talented composer and singer Patricia Del Olmo has appeared with such groups as Pitingo and No Reply .She has occasionally appeared in series like Medico de Familia, Cangrejos, 7 Vidas, Shrek and AIDA. She has also had a memorable role in the tribute to Michael Jackson and Elvis on an itinerant tour. 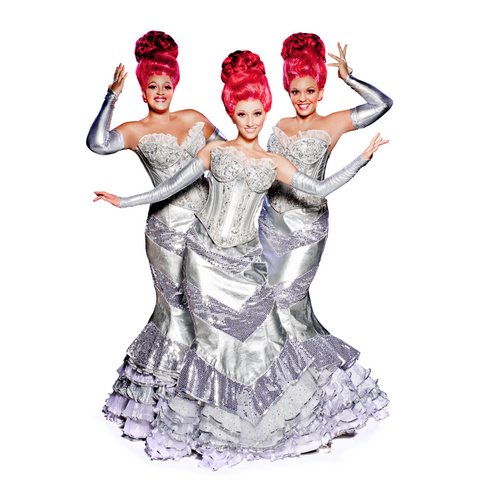 Kudos also go out to Rosanna Carraro, who studied under noted Italian teachers and is able to capture the audience with her superb authority and vocal power. She has studied in Italy and also at the well-known Berkeley College of Music in Boston. Rosanna has also been involved in jazz, pop, soul and funk music.

Curly-haired Aminata Sow is an accomplished singer, composer and vocalist in her right. She has masterfully tackled soul and pop music too. Aminata was a semifinalist on the second edition of LA VOZ on TV.

All the others in the megawatt production are sure to get a standing ovation with their brilliant acting, their stiletto heels, colourful wigs and trendy gaudy garb made popular by ABBA. 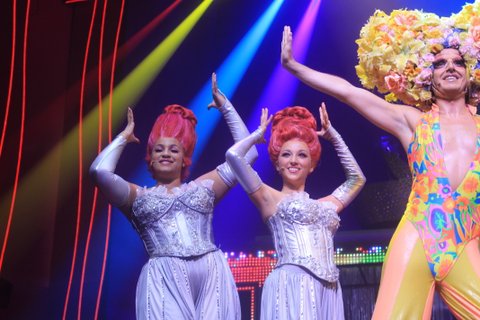 We would highly recommend this extravaganza of the year for those valentine sweethearts who want to renew their vows and kick their heels right in the heart of swinging Madrid.

Note: Priscilla is represented on Wednesdays at 12:00. On Fridays and Saturdays, there are 2 functions, at 18:00 and at 22:00.  For further information and tickets, check out Nuevo Teatro Alcala's website.

© Kris Sinclair Christian, February 2016. Please note that this article may be quoted in editorial contexts only, with source and author.